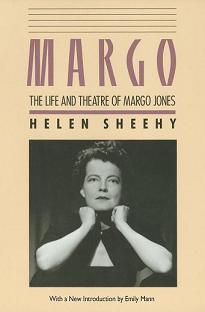 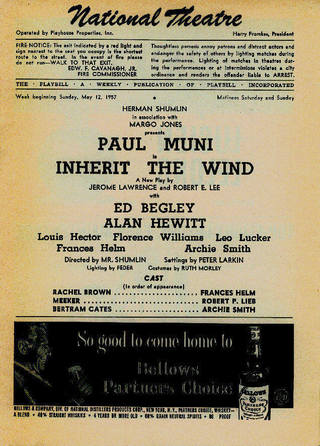 Playbill from the 1955 Broadway production of Inherit the Wind

Margo: The Life and Theatre of Margo Jones

"The figure Sheehy evokes is part rattlesnake, part cowgirl, part southern lady. Sheehy lets us see the wildness in Jones for the spark it gave to others as well as for the destruction it wreaked on her." American Theatre

"A short yesterday ago the dynamic Margo Jones created the theatre of tomorrow. And now Helen Sheehy has written a beautiful, truthful and important biography of one of the seminal figures in the flowering of American and wordlwide dramatic literature." Jerome Lawrence and Robert E. Lee, authors of the classic drama Inherit the Wind

In the United States today, more than four hundred resident nonprofit theatres bring both classics of world drama and daring new plays to life for audiences across the country. Broadway now looks to the resident theatre for new plays and musicals. How did this thriving resident-theatre movement begin? With the pioneering work of one woman: Margo Jones, dubbed by her friend Tennessee Williams the "Texas Tornado" and "a woman of destiny." When Margo Jones established her theatre in Dallas in 1947, it was both the first modern professional resident theatre and the first professional theatre-in-the-round in this country. A passionate believer in new plays, Margo encouraged the early work of not only Williams but also William Inge, Horton Foote, Jerome Lawrence, and Robert E. Lee. She premiered Williams's Summer and Smoke and Inge's The Dark at the Top of the Stairs, and had the courage to produce Lawrence and Lee's now-classic Inherit the Wind in Dallas after it had been turned down by every major Broadway producer.

Eleonora Duse. A Biography
Eva Le Gallienne. A Biography
Margo: The Life and Theatre of Margo Jones
Articles, Essays and Other
Loading…}